Until quite recently, the Marvel Universe boasted of only three female characters of any appreciable intellectual heft: Moira MacTaggert (a scientist), Jennifer Walters (a lawyer), and Kitty Pryde (an electrical engineering whiz). Now, while that’s three more than what DC have historically had to offer, it meant that the choice of brainy female role models has been pretty limited. MacTaggert was a side character who tended to stay in the lab, Walters spent most of her time green and punching things, which meant that, for most, Kitty Pryde was the emblem of geeky girl power in comics.

We remember her as the young Jewish genius taken into the X-Men during the Claremont/Byrne era who then went on to become the brains in Excalibur, but what most people forget is this, her stint as an agent of SHIELD. And, really, that’s for the best. The first issue of Kitty Pryde: Agent of SHIELD has her holding a gun, dressed in SHIELD combat gear, in front of the agency’s emblem, which features a crossed knife and gun. For a character we all loved as a smart martial arts type, it’s incongruous, and that lack of connection with what made the character great runs through the whole three issues this donkey was allowed to trot. 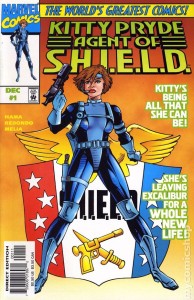 First of all, she’s not really an agent of SHIELD. Something goes wrong on the Helicarrier and it refuses to do anything until Kitty Pryde shows up and logs onto its computer system. So, SHIELD shows up at Excalibur HQ, nearly gets into a fight, and asks her to come up and talk to their computer, for which she’s given a temporary clearance. That temporary clearance is all she ever really gets, which is a far cry from being an “agent of SHIELD.”

Anyway, she goes, talks to the computer, and Oh No it’s a trap! It turns out that Ogun, Wolverine’s old teacher, possessed the Helicarrier’s computer to lure Kitty there in an attempt to then possess her in the most round-about bodyjacking plan yet conceived. Wolverine makes a guest appearance for a while because… it was 1997. Ogun somehow keeps forgetting that Kitty can phase through matter. She challenges him to a battle on the Astral Plane where she randomly gets Xavier type powers for a while, and all in all, nothing quite goes together.

As it stands, Kitty Pryde: Temporary Technical Advisor to SHIELD might have been a more accurate representation. She’s an ace with machines and electrical engineering, but she’s constantly deferring to SHIELD’s male tech guru and doesn’t even try to solve the problems at hand by using her knowledge base. Instead of battling the computer with her brain, she battles the demon of Ogun with her powers and astral swords in between falling in love with the tech guru for no other reason than, effectively, that he told her she should. There’s a lot that might have been done with Kitty Pryde at SHIELD to advance the character, to make her wrestle with the problems of covert governmental power, but instead we get a flat character whose voice meanders all over the place, and whose most important personality traits and abilities are ignored in favor of bland action and trendy but aimless guest appearances.

Smart: 3: Again, Kitty Pryde is one of Marvel’s only smart female super heroes, but you couldn’t tell it from this comic. Meanwhile, the comic itself is a pretty standard affair filled with the necessary motions motivated by convoluted narrative mechanisms.

Funny: 2: The covers are very funny. This is not intentional.

Art: 4: Redondo can draw machines and vehicles quite well, but his figures are pretty hurried and bland. There’s a definite sense of Marking Time on this, which you can see in panels like this: 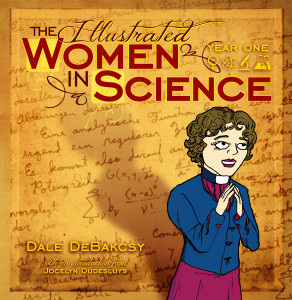 Read about some real female super heroes at Women In Science!

This week did not turn out as planned. What was supposed to happen was that Kitty Pryde Agent of SHIELD was going to give me a chance to talk about Marvel doing right by one of its intelligent female characters, while Route des Maisons Rouge was supposed to be an example of blatant sexism run amok. Instead, Kitty turned out to be a mindless pedestrian slog, while Route, which is a comic about six rival bordellos, every page of which is crammed with massive-breasted prostitutes in a variety of lingerie and bondage items, is, well, let’s talk about what it is…

GG Studios is an Italian comic producer, responsible for a half dozen or so titles, all of which feature massive-breasted adventurers in one capacity or another. Leafing through their products one finds, to all appearances, a slightly more artful version of the boob-fests churned out by Zenescope, the publishers of Grimm’s Fairy Tales and other such barely over-the-counter cheesecake titles. And Route is, visually, absolutely in that company. Dozens of women fill each page, each in more outrageous fetish attire than the last, a swirling mass of cleavage and asses that pound the story into submission.

There are some characters here, but the sheer volume of women in each panel, and the fact that each has essentially the exact same body type and mode of expression prevents you from really figuring out who is doing what and why until the fourth or fifth issue. For the first few issues, every fifth page or so will feature somebody in the midst of some sexual act or other. Eventually, those pages give way to more plot, and it’s hard to say that the comic improves at that point. It chooses narrative over brazenness, and thereby loses its one distinguishing feature in favor of a series of generic and too-quickly-resolved events.

Which brings us to why this book might actually be quite good. It is so thorough-going in its portrayal of the every-day nature of sexual pleasure, in demonstrating the almost banality of human fantasy fulfillment, that I think it has an important place at the table of graphic novel ideas. Let’s face it, if there’s one thing we Americans do painfully poorly in our art, it’s sex. Our over-riding neo-Victorianism pushes us towards all sorts of stupid and dangerous ideas about how it works, and that comes across in traditional American comics. Sex is either not there at all or it’s presented in this plastic, de-biologized manner (think early 90’s X-Men Swimsuit Calendar) that, by its blatant boob-mongering, only enhances our basic Puritan principles. Sex as something extraordinary. By splashing sex-workers on every page, without shame, Monni is doing something that American creators could profit from. There is an honesty here, one that admits that people do enjoy sex, rather a lot, and that people who provide it for a fee aren’t necessarily broken husks of humanity and ought not be shamed for their work or choices.

It’s not the Feminist Book of the Year, but as American feminism is settling into its next wave, one of inclusivity of different sexual and cultural norms and away from some of its previously hidden Protestant-laden assumptions, this sort of frankness is a necessary thing in helping us treat the spectrum of sexual desires with equal respect.

Does the book have faults? Sure. The author seems to think we, as readers, cannot possibly get enough short jokes or watching short characters get beaten up. The plot points come out of nowhere and are resolved way too fast to feel their impact. The English translation’s sense of urban slang is peculiar to the point of almost being charming. But the story centers around female businesswomen shattering expectations of female sexuality without a shade of self-hatred, and that’s not nothing. Was the book written primarily to show females clearing out a commercial space for themselves? I imagine not. I imagine it was written so as to have an excuse to draw lots and lots of hot girls. But can we, as Americans, learn something from its very comfort within its own skin? I think we might.

The Safety Word Is Power-Meter

Fierce: 9: Actually, yeah. The leaders of the different bordellos form a council of businesswomen who work together to resist governmental pressure, while the individual prostitutes are fearless in their identity and social role.

Smart: 5: The leader of the China Dolls is a sort of Zen tactician, but for the rest it’s persistence, guts, and unity that steers the houses through the various crises that arise.

Funny: 7: Most of the jokes are about the mayor’s height, and none of those are funny. But the frankness of the prostitutes’ various conversations is often amusing.

Art: 9: Okay, every panel features massively exploitative shots of women in insane lingerie, but dammit if those costumes aren’t each mini masterpieces of reductionist fashion. It’s all flagrantly exploitative, titillating, and absurd, but Cucca has an eye for ornament and line that brings it together somehow and dances along the improbable just precisely right, or wrong, to support the masses of undifferentiated flesh splashing the page.